May 09, 2014
There is currently a new exhibition in the MU Student Center chronicling the history of the MU periodical ShowMe. The exhibit is located in the display case just outside of Mort's on the main level and features a large number of ShowMe magazines from the Unions' collection. 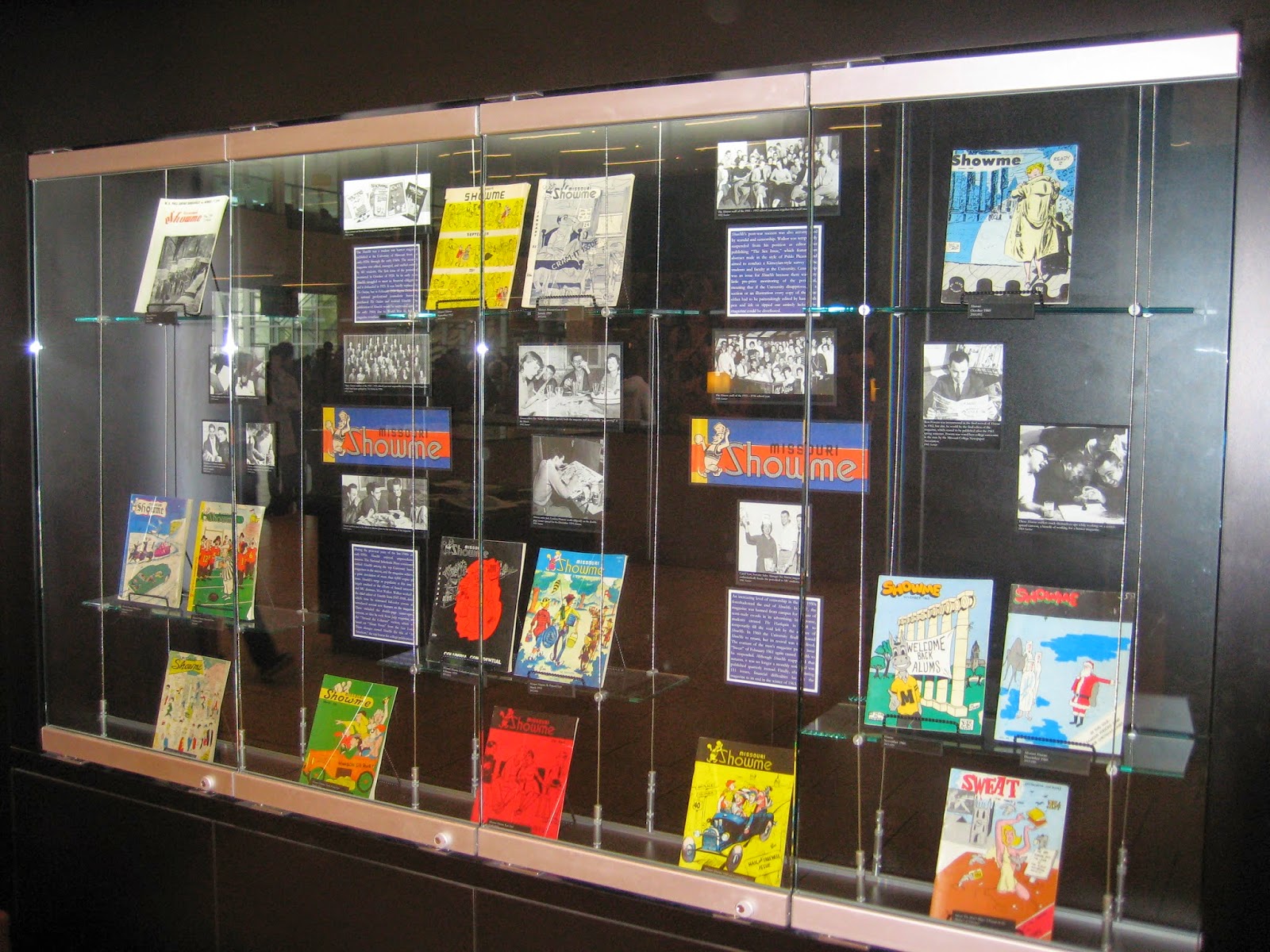 ﻿
The ShowMe was a student run humor magazine published at the University of Missouri from the early 1920s through the early 1960s. The monthly magazine was edited, managed, and staffed entirely by MU students. The first issue of the periodical premiered in October of 1920. In its early years ShowMe struggled to meet its financial obligations and it disbanded in 1925. It was briefly replaced by The Outlaw, but in February 1930 Sigma Delta Chi, a national professional journalistic fraternity, purchased The Outlaw and revived ShowMe. Publication of ShowMe would be suspended again in the early 1940s due to World War II, but the magazine resurfaced in January 1946.
﻿

During the post-war years of the late-1940s and early-1950s ShowMe enjoyed unprecedented success. The National Scholastic Press consistently ranked ShowMe among the top University humor magazines in the nation, and the magazine achieved a print circulation of more than 6,000 copies per issue. ShowMe’s surge in popularity at this time is largely credited to the efforts of famed cartoonist and MU alumnus, Mort Walker.
Walker worked as the editor of ShowMe from 1947-1948, during which time he introduced full-color covers and introduced several new features to the magazine. These included the double-page center-spread cartoon, an idea he took from Judge magazine, and the “Around the Columns” section, which was based on “About Town” from the New Yorker. These changes earned ShowMe the title of “All-American,” the top honor for college publications.
﻿
However, ShowMe’s new found success was also accompanied by scandal and censorship. Walker was temporarily suspended from his position as editor after publishing “The Sex Issue,” which featured an abstract nude in the style of Pablo Picasso and aimed to conduct a Kinseyian-style survey of the students and faculty at the University. Censorship was an issue for ShowMe because there was very little pre-print monitoring of the periodical, meaning that if the university disapproved of a section or an illustration it either had to be painstakingly edited by hand with pen and ink or ripped out entirely before the magazine could be distributed.

Increasing encounters with censorship in the late-1950s foreshadowed the end of ShowMe. In 1957, the magazine was banned from campus for the use of semi-nude co-eds in its advertising. Students created The Harlequin in 1958 to temporarily fill the void created by the banning of ShowMe. In 1960 the University finally allowed ShowMe to return, but its revival was short-lived. The content of the men’s magazine parody issue “Sweat” of February 1961 again caused ShowMe to be suspended. Although ShowMe reappeared that fall, it was no longer a monthly serial and was only published quarterly. Finally, after printing 111 issues, financial difficulties brought the magazine to its end in the winter of 1963.